1962 album THE JAZZSOUL OF LITTLE STEVIE

Video year 1962
Video year 1964 live
His live version was recorded at the Regal Theater in Chicago in June 1962. Marvin Gaye on drums and Stevie playing the harmonica was number 1 ranking Billboard USA on August 21, 1963. Born to be a star, with only 12 years, performed a live album for Motown got one of the first number 1, the youngest person to achieve simultaneously the number 1 singles and albums. 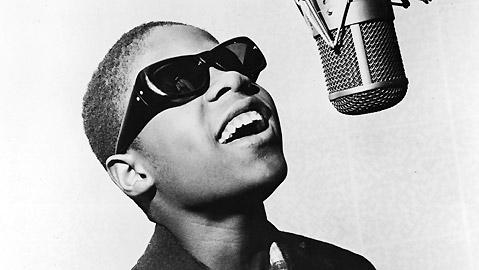 It was Recorded Live: The 12 Year Old Genius and within a delightful song called Fingertips Part II, his first number 1. A live recording made in June 1962 during a Motortown Revue at the Regal Theater in Chicago, Illinois. In this moment a little Stevie Wonder showed his skills to the bongos and harmonica, while interpretation was exploding wild, spontaneous, and rampant pure frenzied pace swing, showing a star that would result in a musical genius of our time.

An unparalleled talent whose star is still alive over the years, strongly radiating light.

'Yeah'
'Yeah'
talking:
Ladies and gentlemen, now I'm going to do a song
taken from my album, 'The Jazz Soul of Little Stevie'
The name of the song is called, umm, 'Fingertips'.
Now, I want ya to clap yo' hand, come on.
Come on!
Yeah!
Stomp yo' feet
Jump up and down, do anything that you wanna do!

How about it?
Let's hear it for him, huh?
Little Stevie Wonder

unknown woman in the audience: 'Yeah!, Harry, get down!'

Presenter:
'How 'bout it?'
'Go ahead an shake this up for me real good'
'Stevie Wonder.'
Home | Biography | Discography | Videos | Songs | Grammys | Top ten
steviewonder.es ® is a registered trademark. All content © 2008-2020 by izugarria.
All contents of the site including, images, video, names, trademarks & logos, are property of their respective owners.