Stevie y Marvin; the key
to display the soul of the XXI century 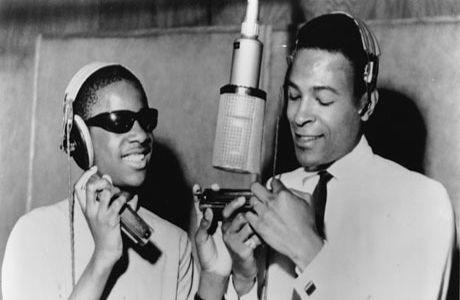 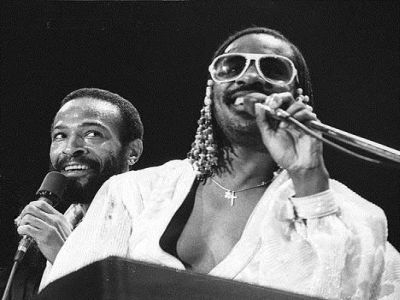 Visionary of music, and a man capable of uniting in his person all a revolution in the black music. Marvin Gaye's life was full of contradictions, of lights and shades, strength and weakness, angels and demons, life and death that gave him and took away his father. His legend began to take shape when he joined the Motown as drummer for artists into the legendary label of Detroit.
Among these artists a little boy who had just surpassed 10 years old, and whose musical parallels were crossing over the years. He was Stevie Wonder.

Those first meetings, in the early 60's, Stevie Wonder surprised the world with the live performance of Fingertips, and had to percussion with a young Marvin Gaye eager to be known as singer. For that was full of virtues; extraordinary composer, full of sensuality and feeling vocalist, a reference to any vocalist of RnB, a true gallant overflowing glamor and style.

That way was their first hits with the Motown, "Stubborn Kind of Fellow" in 1962, or "How Sweet It Is (To Be Loved By You)" in 1964 Songs that Stevie Wonder paid tribute by versions, the latter particularly in the beginning of his concerts earlier this decade. 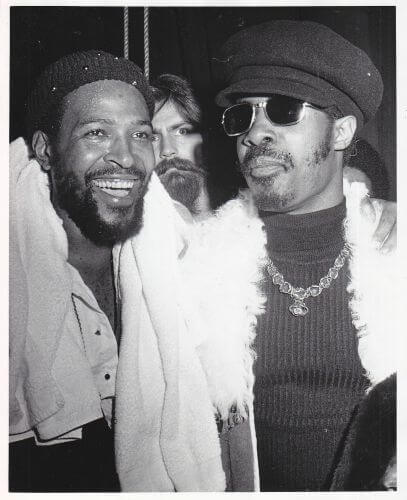 Of this decade are also compositions of Stevie for Marvin; You Are The One For Me, Try My True Love, o Without Your Sweet Lovin'. But continuing with the parallels..., both married their personal lives marrying people close to Motown. Stevie Wonder with Syreeta Wright, one of his secretaries and songwriter, and Marvin Gaye neither more nor less than Anna Berry, sister of Motown founder Berry Gordy, Jr.

But the 70's appear, and as a spring explosion, seasonal music world was shaken by the creative awakening of these two men. Marvin Gaye fight for publish What's Going On. An album that broke all established by Motown. A album pioneer in maintaining a storyline social criticism and continuity in the songs, which embodied his concerns about the global situation, the wars, the ecology and life. The refusal of the Motown and his brother in law Gordy to the release of this album were outright trying to block his release. He came to be classified as "the worst I've ever heard" !

He found only the support of a Stevie Wonder, who as Marvin Gaye, hovered in his mind the idea of controlling his music creativity. But at the end both get their wish, and if Marvin gaye published his landmark album, Stevie also launched the first of the so-called classic albums, "Music Of My Mind".

Albums with committed and experimental songs, more politician Marvin, and perhaps most introspective Stevie, but undoubtedly, was all a renewal of black music. 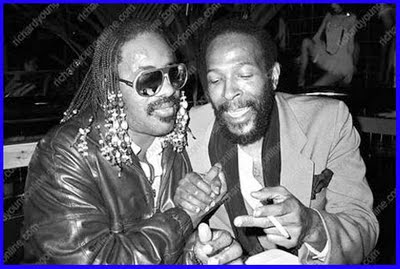 In this same decade -year 1978- Stevie Wonder and Marvin Gaye, along other artists of the Motown of all the life, with Diana Ross and Smokey Robinson, participate through the song "Pops, We Love You (A Tribute to Father)", paying tribute to the recently deceased Berry Gordy, Sr., also knows as "Pops" and a man closely linked to the Motown since the beginnings and father of his founder, Berry Gordy, Jr.

But Marvin's life had entered into an emotional decline dragged him out of control into the darkness of drugs, sex addiction, and a more than delicate economic situation.
It took several years to publish an album again, this time not with Motown, but with CBS, "Midnight Love". Album containing one of his most famous songs "Sexual Healing", and with whom he won two Grammys. But his return would be very short because of his father, stubborn moral and eccentric minister of a sect that combined Orthodox Judaism with Christian fundamentalism, decided in one of his many discussions with Marvin, putting an end to his life through several shots. It was the fateful April 1, 1984, just one day before what would be his birthday. The funeral was full of touching moments, as the moment Stevie performing a song he had just composed. It was "Lighting Up The Candles", a song that years later -1991- was part of the soundtrack of Spike Lee's "Jungle Fever".
Both visionaries of music, both pillars which support the soul, both with feeling and soul in everything they have done, making eternal mirrors where to find the guiding light music present and future, because they are the key to display the soul music of the XXI century.
Lighting Up The Candles
Lighting up the candles, lighting up our love
Lighting up the candles, lighting up our love

Home | Biography | Discography | Videos | Songs | Grammys | Top ten
steviewonder.es ® is a registered trademark. All content © 2008-2020 by izugarria.
All contents of the site including, images, video, names, trademarks & logos, are property of their respective owners.